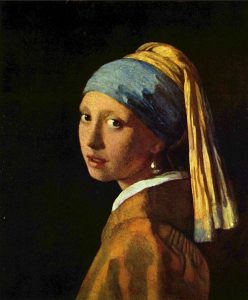 Rafael Sistine Madonna 1512
Stored in the Old Masters Gallery in Dresden.
The picture has a little secret: the background, seen from a distance, appears to be clouds, upon careful examination turns out to be the heads of angels. And the two little angel depicted in the picture below became the motive of numerous postcards and posters.
Rembrandt “Night Watch” 1642
Stored in the State Museum in Amsterdam.
The true name of Rembrandt’s painting “The Speech of the rifle company of Captain Frans Banning Kok and Lieutenant Willem van Reitenburg.” Art historians who discovered a painting in the 19th century thought that the figures appeared on a dark background, and it was called “Night Watch”. Later it was discovered that a layer of soot makes a dark picture, and the action actually takes place in the afternoon. However, the painting has already entered the treasury of world art under the name “Night Watch”.
Leonardo da Vinci The Last Supper 1495–1498
Located in the convent of Santa Maria delle Grazie in Milan.
For more than 500-year history of the work, the fresco was repeatedly destroyed: through the painting it was made, and then the doorway was laid, the refectory of the monastery where the image is located was used as a weapon depot, a prison, bombed. The famous fresco was restored at least five times, and the last restoration took 21 years. Today, to see a work of art, visitors must book tickets in advance and can spend only 15 minutes in the refectory.
Salvador Dali “The Constancy of Memory” 1931
Stored in the Museum of Modern Art in New York.
According to the author himself, the picture was written as a result of associations that have arisen in Dali at the sight of melted cheese. After returning from the cinema where she went that evening, Gala correctly predicted that no one, once she saw Constancy of Memory, would forget it.
Peter Bruegel the Elder “Tower of Babel” 1563
Stored in the Museum of Art History in Vienna.
According to Bruegel, the failure to follow the construction of the Tower of Babel is not to blame for the language barriers that suddenly appeared according to the biblical story, but the mistakes made during the construction process. At first glance, the huge structure seems to be quite strong, but upon closer examination it can be seen that all the tiers are laid unevenly, the lower floors are either unfinished or already collapsing, the building itself is heeling towards the city, and the prospects for the whole project are very sad.
Kazimir Malevich “Black Square” 1915
Stored in the State Tretyakov Gallery
According to the artist, he painted a picture for several months. Subsequently, Malevich made several copies of the “Black Square” (according to some information, seven). According to one version, the artist could not finish work on the painting at the right time, so he had to gloss over the work with black paint. Subsequently, after the recognition of the public, Malevich wrote the new “Black Squares” already on blank canvases. Malevich also painted “Red Square” (in duplicate) and one “White Square”.
Kuzma Sergeevich Petrov-Vodkin “Bathing the Red Horse” 1912
Located in the State Tretyakov Gallery in Moscow.
Written in 1912, the picture turned out to be prophetic. The red horse acts as the Fate of Russia or of Russia itself, which the fragile and young rider cannot hold. Thus, the artist symbolically predicted with his picture the “red” fate of Russia of the 20th century.
Peter Paul Rubens “The Abduction of the Daughters of Leucippus” 1617-1618
Stored in the Old Pinakothek in Munich.
Paul Gauguin “Where did we come from? Who are we? Where are we going? ”1898
Stored in the Museum of Fine Arts in Boston.
At the direction of Gauguin himself, the picture should be read from right to left – the three main groups of figures illustrate the questions posed in the title. Three women with a child represent the beginning of life; the middle group symbolizes the daily existence of maturity; in the final group, according to the artist, “an old woman approaching death seems reconciled and indulged in her thoughts”, at her feet “a strange white bird … represents the futility of words”.
Eugene Delacroix “Freedom Leading the People” 1830
Stored in the Louvre in Paris
Delacroix created a picture based on the July revolution of 1830 in France. In a letter to his brother on October 12, 1830, Delacroix writes: “If I have not fought for the Motherland, then at least I will write for her.” The naked chest of the woman leading the people symbolizes the selflessness of the French people of that time, who with a “bare chest” went to the enemy.
Claude Monet “Impression. Rising Sun “1872
Stored in the Marmottan Museum in Paris.
The title of the work “Impression, soleil levant” from the light hand of journalist L. Leroy became the name of the artistic direction “impressionism”. The picture is painted from life in the old avantport of Le Havre in France.
Jan Vermeer “Girl with a pearl earring” 1665
Stored in the Mauritshuis Gallery in The Hague.
One of the most famous paintings by the Dutch painter Jan Vermeer is often called the northern or Dutch Mona Lisa.