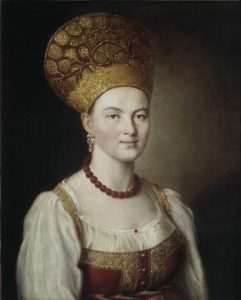 In the Annensian era, the format of the coronation parade portrait was developed. The established scheme will exist for almost the entire XVIII century. At the end of the reign of Elizabeth Petrovna, on the initiative of Shuvalov, the Academy of Arts was established. In the art of Elizabethan time, the beginning of the work of the Academy of Arts (1757) became a kind of watershed – it became customary to divide the art into pre-academic and post-academic periods in fine art. The main content of Elizabethan time for Russian painting is the so-called pre-academic state. In the visual arts of the Elizabethan period, portrait form is still the main one. As an important change, the appearance of a rocaille theme and tones should be noted.
Before us is a small-sized chamber portrait in the height of Empress Elizaveta Petrovna. The work, written by George Groot, a German painter, invited to Russia in 1741, was made in the rococo style. “In Russia, in the work of the Groot brothers, there was a turn from the traditional style of Dutch painting of small genres to a light elegant Elizabethan rococo, developed under French influence.” The image in the gallery of typological varieties that existed in the portrait of the XVIII century, presents two types of signs at once: the parade-illustrious “ode” and “portrait in the role”.
The Empress is represented in the interior: in the background the maroon-brown gathered curtain – from the point of view of the correctness of the space construction, the heroine is placed in a real situation and there is no feeling that the figure is snatched from the environment. Curtain with kutasami and fringe replaces the scenes and creates the illusion of theatricality of all that is happening. This situation is consistent with the nature of the Rococo style. In everyday court life in the era of the reign of Elizabeth I, carnivals and festivals were common. During the reign of Elizabeth, the situation at the court can be fully compared with the continuous Versailles festivals. “In addition to the two days a week already scheduled for the French comedy, there will be another masquerade twice a week. The Grand Duke added one more day for concerts with him, and on Sundays he usually had a kurtag. ” The philosophical concept of Rococo assumed constant imitations, metamorphoses, a distortion of reality and a departure from it. The theme of the gallant festival is one of the most common in Rococo (first appeared in Watteau). Rokaylny style, praising youth and beauty, elegance of forms and gallantity of manners, was well suited to create the image of Elizabeth in painting. The heroine is depicted in a black masquerade domino with a mask in her hand. The neckline is coquettishly draped with a transparent fabric in the fashion of the mid-18th century. A black veil adorns the head in a powdered wig. The motif of the game, the change of costumes, the melancholic grace create, in spite of the dark palette of the picture, a festive atmosphere.
What could serve as an inspiration for creating such an unusual mysterious image of a beautiful lady? It is possible that in this costume, Elizabeth is the red-haired lady. Indeed, in the reign of Anna Ioannovna and Elizabeth Petrovna, card games were already flourishing and were, in fact, the official court fun.
The image of the heroine on the “Portrait of Elizaveta Petrovna in a black fancy dress domino with a mask in her hand” could very likely have been inspired by the paintings of Diego Velasquez. There is a distant similarity in the construction of the composition of this portrait with the “Portrait of Queen Isabella” (1631-1632). There can be no talk of direct borrowings of G. – H. Groot from the portrait of Spanish queen Isabella of the Baroque era – the canvas is shared not only by 120 years, but also by the territorial remoteness of Germany and Spain, but you can try to draw analogies in search of the source: whose role was played by the rocaille Empress , fatal Spanish or trump lady?
The conceptual content, aesthetic and compositional solution of the portrait fully meets the requirements of the rococo style. The rokail interpretation of the image of the empress in the portraits of Groot makes it possible to show the identity of the ruling person not so much as a crowned person, but as a charming, slightly flirtatious beauty.
In working at the court of the Empress Elizabeth G. G.-H. Groto, according to many researchers, studied I.P.Argunov. The art of the artist surprisingly combined European academicism and the traditions of the national parsuna. [3] According to the dating and quality of the performance, this portrait is already more to the early classicism of Catherine’s time (this work was considered in the context of Elizabethan time, since IP Argunov is considered to be an artist of the Elizabethan era).
“Portrait of an Unknown Woman in Russian Costume” is one of the most perfect creations of IP Argunov. The work belongs to the late period of the artist.