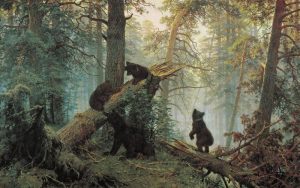 Pablo Picasso painted one of his famous portraits in less than 5 minutes
One of his acquaintances, Pablo Picasso, while examining his new works, sincerely told the artist: “Sorry, but I can’t understand it. Such things simply do not exist. ” To which Picasso retorted: “You don’t understand Chinese either. But he still exists. ” However, Picasso did not understand many. Once he suggested to the Russian writer Ehrenburg, his good friend, to write his portrait. He happily agreed, but did not have time to sit in a chair to pose, as the artist said that everything was ready.
Ehrenburg expressed surprise at the speed of execution of the work, in fact not even 5 minutes had passed, to which Picasso replied: “I have known you for 40 years. And all these 40 years, I learned to paint portraits in 5 minutes. ”
Ilya Repin helped sell a picture that he did not write
One lady bought a completely mediocre picture on the market for only 10 rubles, on which the signature “I. Repin” proudly flaunted. When a connoisseur of painting showed this work to Ilya Efimovich, he laughed and added “This is not Repin” and put his autograph. After some time, an enterprising lady sold a picture of an unknown artist with an autograph of the great master for 100 rubles.
Bears in the famous painting Shishkin painted another artist
Among artists there is an unspoken law – professional mutual assistance. After all, each of them has not only favorite stories and strengths, but also weak points, so why not help each other. So, it is known for certain that for the picture “Pushkin on the Sea” by Aivazovsky, the figure of the great poet was painted by Repin, and for the picture by Levitan “Autumn Day. Sokolniki ”the lady in black was painted by Nikolai Chekhov. The landscape painter Shishkin, who could draw every blade of grass and a needle in his paintings, when creating the painting “Morning in a Pine Forest” did not make bears. Therefore, the bears for the famous Shishkinsky canvas were painted by Savitsky.
A piece of fiberboard, over which the paint was simply poured, became one of the most expensive paintings.
The most expensive painting in the world in 2006 was the Jackson Polok canvas “Number 5, 1948”. At one of the auctions, the picture went for $ 140 million. It may seem funny, but the artist didn’t particularly bother to create this painting: he simply spilled paint on a piece of fibrolite laid out on the floor.
Date of creation of his picture Rubens encrypted by the stars
Art historians and scientists for a long time could not establish the date of creation of one of the most famous paintings by Rubens – the painting “The Feast of the Gods on Olympus”. The riddle was solved only after astronomers looked at the picture. It turned out that the characters in the picture settled down in exactly the same order as the planets were located in the sky in 1602.
The Chupa Chups logo was painted by the world famous surrealist
In 1961, Enrique Bernata, the owner of Chupa-Chups, turned to the artist Salvador Dali with a request to come up with an image for a candy wrapper. Gave a request fulfilled. Today this image, albeit in a slightly modified form, is recognizable on the candies of this company.
It is worth noting that in 1967 in Italy, with the blessing of the Pope, a unique version of the Bible was released with illustrations by Salvador Dali.
The most expensive painting Flour brings misfortune
Munch’s “Scream” was sold at auction for $ 120 million and is today the most expensive painting by this artist. They say that Munch, whose life is a series of tragedies, put so much grief into her that the picture absorbed negative energy and takes revenge on the offenders.
One of the employees of the Munch Museum somehow accidentally dropped the picture, after which he began to suffer from terrible headaches that led this man to suicide. Another employee of the museum, who could not hold the picture, literally after a few, got into a terrible car accident. A visitor to the museum, who allowed himself to touch the picture, after some time burned alive in a fire. However, it is possible that this is just a coincidence.
Malevich’s Black Square has an “elder brother”
“Black Square”, which is perhaps the most famous painting by Kazimir Malevich, is a canvas of 79.5 * 79.5 centimeters, in which a black square is depicted on a white background. Malevich wrote his picture in 1915. And in 1893, 20 years before Malevich, Alfons Allais, a French humorist, painted his “black square”. True, Alla’s painting “The Battle of Blacks in a Deep Cave on a Dark Night” was called.