Pissing pug, Lucifer and other ambiguous sculptures that caused a lot of controversy 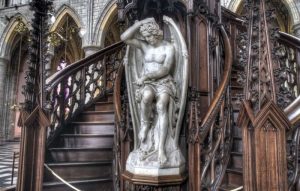 Any art form is controversial, and statues are no exception. Considering that they are made, as a rule, in honor of famous people, objects or events, all people simply cannot have the same attitude to sculptures. Therefore, it is not surprising that often ordinary statues are the cause of discord.
1. Lucifer from Liege
“Lucifer from Liege” – a statue in the Cathedral of St. Paul in the Belgian city of Liege. The official name of the statue is Le genie du mal (“The genius of evil). It was made in 1848 by sculptor Guillaume Gifs. But few people know that in fact the “Genius of Evil” was not the original statue of Lucifer, created for the church. Earlier, L’ange du mal (“Angel of Evil”), who was made by Guillaume’s brother, Joseph in 1842, was born.
But the “Angel of Evil” caused violent debate soon after it was installed in the cathedral. The Holy Fathers were concerned that the statue was too beautiful for the devil and were afraid that it would negatively affect the children who attended the church. They commissioned Guillaume to carve a replacement for her. The second sculpture (already by Guillaume) is also notable for its unique beauty. Folded wings protect the devil, as it were, in repentance. At his feet lies a bitten forbidden fruit – an apple.
2. Brown Dog Statue
The statue of a brown dog in London’s Battersea district caused such heated debate that they even led to social unrest at the beginning of the 20th century. Interestingly, the current statue was installed to replace the original one. The first monument to the dog was dismantled after a series of public protests and riots between vivisectionists (people who supported the use of animals for experimentation) and anti-anti-discriminationists (who opposed this practice).
The original statue was erected by anti-anti-bishops in 1906. She was dedicated to all dogs, in particular the “brown dog”, which was used for a series of operations for two months at a university college in London in 1903. On the memorial plaque attached to the pedestal of the statue, an entire petition was engraved criticizing the use of dogs in operations.
On December 10, 1907, 1000 medical students (who were vivisectionists) held a protest march opposite the statue in Trafalgar Square, and another 100 in Battersea. Fearing that the Vivisectionists would damage the statue, the police put a round-the-clock guard near it. In 1910, the police and the city council agreed to remove the statue, and the replacement was established only in 1985.
3. J. Marion Sims
J. Marion Sims is considered the father of modern gynecology. In the 1840s, he developed a treatment for vesicular vaginal fistula, in which fluid from the bladder begins to leak into the vagina (childbirth is sometimes caused by this situation). In addition, Sims also founded the first hospital for women in New York and invented new surgical treatments for “female” diseases. However, he remains a very controversial figure among women, despite his contribution to improving their health.
He used black slaves for many of his experiments, and also performed his fistula treatment operations on women he bought without anesthesia. For his work, Sims was awarded a statue in Central Park, and all women slaves were simply forgotten. The statue has been the subject of controversy since 1959 and was eventually demolished in April 2018 after a series of protests.
4. Blue Mustang Death
Blue Mustang – a statue of a blue horse with a height of 9.8 meters, which is installed near the International Airport of Denver. Since its installation, the statue has gained notoriety, and critics even called it “Blucifer” (derived from “blue Lucifer”). It is not difficult to understand why the Blue Mustang has so few fans, because at night its eyes glow red.
Although the sculptor Louis Jimenez stated that the statue should symbolize the Wild West, many believe that a similar nuance with the eyes of a horse only made the statue devilish and ugly. Also, the fact that Jimenez himself was killed by part of his own statue, which fell on his head in the studio, added fuel to the fire. He never finished the Blue Mustang until his death in 2006, and his sons completed the work. Since the statue was installed near the entrance to the airport in 2008, the squall of criticism does not subside. However, the authorities do nothing, hoping that people will get used to the “Blue Mustang.”
5. Pissing Pug
In May 2017, artist Alex Gardega added a pug statue to the statues of “Fearless Girl” and “Attacking Bull” on Wall Street in New York.