“Great castration”: As covered up the shame in paintings and sculptures at different times 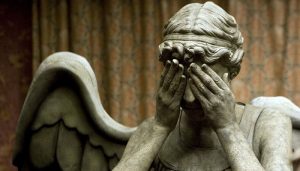 The history of art knows many examples when, at a change in cultural epochs, works created by predecessors begin to be perceived not quite rightly. Probably the most significant in this case is an example of the appearance of fig leaves on antique statues. For the sake of moral preservation in the Middle Ages, thousands of ancient masterpieces were subjected to “great castration.” Interestingly, this tradition today takes on a “second wind”.
The subject of nude in art often becomes a stumbling block and is still a heated debate – does the artist have the right to reveal his model, is this really an artistic device or just a way to get unhealthy attention? In the case of antique statues, it would seem, the issue was resolved long ago and unequivocally: they were created in the culture where nudity in men was considered normal and did not cause an ambiguous reaction.
Of course, the statues of philosophers or strategists were dressed, but the images of the athletes were always just naked. The fact is that the young men engaged in sports in this form. There is even a historical fact of the VIII century BC about the runner Orsipe. During the competition, he tore off the loincloth that had interfered with him and managed to win. Since then, in ancient Greece, men engaged in sports only naked, rubbing the body with olive oil. In the classical era of the Hellenes, the ideal of kalokagatia was formed – the harmony of the inner world of a person with his appearance.
Medieval culture was diametrically opposed to this issue, closing everything that can be closed in a person’s image. By the middle of the XVI century, the Vatican rulers suddenly realized that they were in an ambiguous position, owning a multitude of precious masterpieces of ancient art that did not conform to the cultural tradition of their era. Pope Paul IV began the struggle for morality in art. True, at first she wore a more peaceful, recommendatory character, but literally in another 100 years, Pope Innocent X set about “covering the shame” seriously. It is to his rule that the famous “great castration” is attributed. At the same time, many of the ancient statues lost their dignity physically – they were simply broken off, and later the cleavage was covered with fig leaves made especially for this. Pope Clement XIII and Pius IX continued this noble struggle.
The very idea of ​​using this particular plant was taken from the Bible: Adam and Eve, when they realized their nakedness, “sewed fig leaves, and made themselves aprons”. Fig – she figs and figs. Thus, in the art of the Middle Ages, the canon was formed to cover these leaves in the paintings and statues of the progenitors of man. In the future, the expression “fig leaf” itself acquired a figurative meaning — a cover for knowingly shameless or dishonest actions.
As time went on, mores changed in the direction of greater openness, but the need to “cover up the shame” of the statues remained relevant. In 1857, a copy of the famous David Michelangelo was presented to Queen Victoria. Created in 1504 (that is, even before the unfolding struggle against excessive openness), the masterpiece escaped the fate of many statues and delighted the eye with realistic manhood. It is believed that the sight of him so embarrassed the queen, that she immediately “exiled” a gift to the newly founded Victoria and Albert Museum in London.
In addition, the firm D. Brucciani & Co. The fig leaf was half a meter long. They didn’t spoil the statue, but they fixed the leaf on special steel hooks. He covered David, by the way, right up to 1950. Now it is shown separately in the same room.
Another interesting case occurred at the beginning of the 20th century. And he was connected with the picture. Henri Matisse, by order of a Moscow merchant and collector Sergei Schukin, wrote the pair panels “Dance” and “Music”. The paintings exhibited before being sent to the customer in the Paris Autumn Salon of 1910 caused a scandal of shocking nudity and “unexpected interpretation of images”. Schukin even refused them after that, but literally a few days later he changed his mind, writing to the artist: “Sir, on the road (two days and two nights) I thought a lot and felt ashamed of my weakness and lack of courage. You can’t leave the battlefield without trying to fight. ”