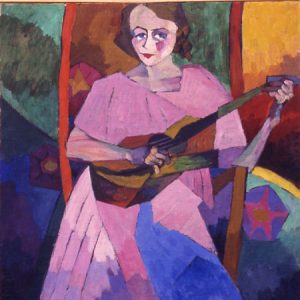 Avant-gardism, developed in the literature by Vladimir Mayakovsky and Velimir Khlebnikov, since the 1910s has also spread powerfully in Russian painting. Back in the 1910s avant-gardism in Russia was fond of Kazimir Malevich (who created the style of suprematism), Vasily Kandinsky, Vladimir Tatlin. The heyday of the Russian avant-garde came in 1914–1922. What was the avant-garde? Combining abstractionism, constructivism, cubism, suprematism and some other postmodernist movements in painting, he abandoned realism, while retaining an emphasis on the form of objects as such. Thus, Malevich’s Suprematism appeared in the 1910s as a writing style in the form of combinations of multi-colored planes and the simplest geometric outlines.
However, times have changed dramatically, and in the 1920s, avant-garde with a huge fashion for him both in Russia and abroad, ceased to be the dominant trend in painting, as in literature, and the Soviet government did not like it. In the 1920s, during the domination of avant-gardism and decadence among the artistic circles, the Association of Artists of Revolutionary Russia or AHRR became more and more obvious. While Kazimir Malevich and Wassily Kandinsky continued their experiments with abstractionism and forms of objects, a whole pleiad of artists set as its goal to develop the tendencies of the Russian peredvizhniki and depict life only in realistic colors.
The trail of the stroller in socialist realism
The AHRR rejected avant-gardism and focused on displaying the life of the workers and peasants. He headed the AHRR Pavel Radimov, the last head of the Association of the Wanderers. We recall that the movement of the end of the 19th century was attributed to the Wanderers, when the realist artists N. Ge and Kramskoy. V.Perov traveled with their exhibitions in different cities of Russia. For the sample was taken the embodiment of the life of the Red Army, workers, peasants, revolutionaries and heroes of labor. And an irreconcilable struggle began, in particular, with avant-garde artists, who also took the side of the revolution. Pavel Radimov declared the avant-garde a harmful fabrication, and opened the “Exhibition of paintings by realistic artists to help the starving.” Emphasis was placed on the fact that non-realists do not help starving people, and in vain they eat their own bread.
For the sake of fairness, I must say that before the repressions it was still far away, and many well-known artists joined the AHRR in those years: KF Yuon, B.M. Kustodiev, K.S. Petrov-Vodkin. In 1926, representatives of the avant-garde “jack of diamonds”, which had previously denied the traditions of both academicism and realism of the 19th century, joined AHRR: they were closer to post-impressionism, fauvism and cubism.
Why such a willingness to join the ranks of the Association of Artists of Revolutionary Russia? Because of its proximity to power, which was growing, and by 1932, AHRR became the basis of a single Union of Artists of the USSR. But at first, since 1923, she only received streams of artists of various stripes, who poured into her full-flowing bed.
The struggle for avant-garde art continued until 1930
of the year. Let’s say suprematism. Such a “Reaper” by Kazimir Malevich could not have arranged the Soviet power, because, recommending this picture as a poster in the red corners in various cities of the country, the authorities risked to cause misunderstanding and laughter among unprepared “working people”. Art should have been fully understood by the people, the customer of art was not the highest strata of society, but the bureaucratic “middle” of the creative intelligentsia, etc.
And for this art had to get out of the global bed of the avant-garde, where Kandinsky and Malevich were. So in 1930, Kazimir Malevich was arrested as a “German spy” (all this time he participated, including in foreign exhibitions). However, thanks to the intercession of the People’s Commissar of Education Lunacharsky, who called Malevich “People’s Commissar of the Arts Narcopros” was released from prison and even in 1932 received the position of head of the Experimental Laboratory in the Russian Museum.
However, the style of his work – and in Vitebsk, where in 1919-22. He taught at the Folk Art School, headed by Marc Chagall, and wrote his theoretical work “Suprematism. The world as pointlessness or eternal rest “in the Petrograd Museum of Artistic Culture, where he received a directorship in 1923-26, and in the Kiev Art Institute, where the artist taught in 1928-30. The authorities made it clear that he was eyeing him and, case of disobedience, followed by repression. Avant-garde and Suprematism not only did not need the authorities, they interfered with it so much that they were ready to deal with one of the greatest Russian artists physically.
On the other hand, the power beckoned: just go over to our side of social realism, get away from abstractions in painting, and all the benefits and privileges are yours. As for privileges and privileges, they were received and distributed by the Association of Artists of Revolutionary Russia. The declaration of her approach to art was: (1922): a realistic picture of events, not abstract fabrications.