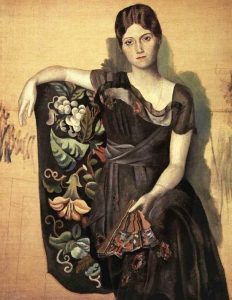 Pablo Picasso wrote a huge number of paintings, tens of thousands of paintings – so many that no one knows all his works, even his professional biographers. They constitute the core of the collection of any museum in the world and are the subject of legitimate pride of private collectors. They shake the auctions of modern art and excite the imagination of the most daring museum robbers.
And I gained courage among the whole mass of his vast creative heritage to select, to your taste, the beautiful female images created by the artist. They, too, are the greatest multitude, limited themselves with difficulty … But at the same time she considered it appropriate to recall the beloved muses of the genius of Pablo Picasso.
Born in Malaga, Spain, on October 25, 1881, was born. Pablo’s father – José Ruiz Blasco (Picasso – the name of the artist’s mother, he signed early works by Pablo Ruiz or Ruiz-Picasso), a drawing teacher and curator of the local museum, pinned great hopes on his son and hoped that he would make a career in academic art. The first exhibition of Picasso took place when he was 13 years old. At the age of 14 he entered the La Lonja School of Fine Arts in Barcelona. He then studied at the San Fernando Royal Academy of Fine Arts in Madrid, but did not complete the course.
Picasso was nineteen years old when he came to Paris in 1900 to visit the World’s Fair, where in the Grand Palais, in the section on Spanish art, his big painting “The Last Moments”, exhibited in an academic manner, was exhibited. In 1901, his personal exhibition opened on Laffitte Street, famous for its prestigious art galleries. The young man was virtually unknown at that time outside of Barcelona, ​​but already created hundreds of paintings. The works of the young artist were enthusiastically received by the French public and received favorable comments from the picky Parisian critics. Pablo returns to his homeland, but his heart is in Paris. In 1904, he again comes to Paris to settle there permanently.
The works of Picasso, more than 50,000 paintings, drawings, engravings, sculptures, ceramics, created in more than 80 years of creative activity, can be divided into periods that often overlap in time. The first noticeable period of the artist’s work is blue, which began shortly after his first exhibition in Paris and the suicide of his close friend, Carlos Casagemas. “Grief constitutes the background of life,” says young Picasso at this time. The works of this period are dominated by gray-blue and deep blue-green cold colors, the colors of melancholy, gloom, sadness, old age and death.
The characters in the paintings are emaciated mothers with children, tramps, beggars, alcoholics, prostitutes, blind people. The content of his works of that time is unusual for French painting, but typical of the Spanish tradition. Hopeless loneliness, deprivation, poverty on the verge of poverty, physical defectiveness of the characters sometimes overshadow their humanity, but the artist’s sympathetic attitude towards his characters is passed on to the viewer. Pablo lives between Barcelona and Paris, on the eve of the final relocation to the capital of France.
The Model Fernanda Olivier was the first woman of Picasso, with whom he established a long-term relationship (1904-1912). Picasso met her in 1904, after settling in Paris. The artist portrayed Fernanda in many paintings of the pink period. Although Fernanda was married, she stayed with Picasso for nine years. In the years 1900-1905, Olivier was a professional model, but when she moved to Picasso, he forbade her to pose for other artists.
After acquaintance with Fernanda, gloomy, almost monochrome paintings with tragic, depressive characters are replaced by executed graces, subtleties and charm of the picture in cheerful colors, mostly red, orange, pink, and gray. This short period in the work of the Spanish artist is called pink.
At this time, he makes new friends, mostly among writers. For the first time in his life, he has a lot of love, and he and Fernanda settle in his studio in Montmartre, in the Bato Lavoir hostel, where beginning artists lived. In the pink period, Picasso wrote many plots with circus performers, French comedians – he and his friends often visit the circus, which is located next to their hostel. In circus artists, artists have always seen a lot of kinship – they and others held a marginal position in society, were poor and kept together. Picasso often portrays himself in the role of Harlequin, and in the role of other characters – his friends.