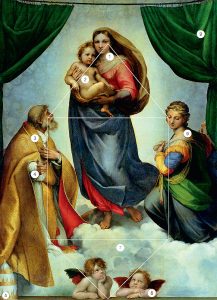 “The genius of pure beauty” – said Vasily Zhukovsky about the “Sistine Madonna”. Later, Pushkin borrowed this image and dedicated it to an earthly woman, Anne Kern. Rafael also wrote to Madonna from a real person, probably from his own mistress
1. Madonna. Some researchers believe that the image of the Blessed Virgin Virgin Raphael was painted from his mistress Margherita Luthi. According to the Russian art historian Sergei Stam, “in the eyes of the Sistine Madonna, direct openness and gullibility, ardent love and tenderness, and at the same time wariness and anxiety, indignation and horror of human sins froze; indecision and at the same time, the willingness to accomplish the feat (to give his son to death. – Note. “Around the World”) “.
2. Baby Christ. According to Stam, “his forehead is not childishly high, and his eyes are absolutely not childishly serious. However, in their eyes, we see neither edification, nor forgiveness, nor reconciling consolation … His eyes are looking at the world that has opened before them intently, intensely, with bewilderment and fear. ” And at the same time, in the look of Christ one reads the determination to follow the will of God the Father, the determination to sacrifice himself for the salvation of mankind.
3. Sixt II. Very little is known about the Roman pontiff. He stayed on the Holy See for a short time, from 257 to 258, and was executed under Emperor Valerian through a behead. Holy Sixt was the patron saint of the Italian papal clan Rovere (Italian: “oak”). Therefore, acorns and oak leaves are embroidered on his golden mantle.
4. The hands of Sixt. Raphael wrote the holy Pope with his right hand pointing to the patronal crucifix (recall that the Sistine Madonna hung behind the altar and, accordingly, behind the altar cross). It is curious that on the hand of the pontiff the artist depicted six fingers – another six encoded in the picture. The left hand of the high priest is pressed to his chest – as a sign of loyalty to the Virgin Mary.
5. The papal tiara is removed from the head of the pontiff in deference to Madonna. Tiara consists of three crowns, symbolizing the kingdom of the Father, Son and Holy Spirit. It is crowned with an acorn – a heraldic symbol of the Rovere clan.
6. Saint Barbara was the patroness of Piacenza. This holy of the third century, secretly from a pagan father, turned to faith in Jesus. Father tortured and beheaded a renegade daughter.7. Clouds Some believe that Raphael depicted clouds in the form of singing angels. In fact, according to the teachings of the Gnostics, these are not angels, but not yet born souls, who are in heaven and praise the Most High.
8. Angels. Two angels at the bottom of the picture look impassively into the distance. Their apparent indifference is a symbol of the acceptance of the inevitability of divine providence: Christ is ordained with a cross, and he cannot change destiny.
9. The open curtain symbolizes the open heaven. His green color indicates the mercy of God the Father, who sent his son to death in order to save people.
Pushkin borrowed a poetic formula from an older contemporary and turned it to an earthly woman, Anne Kern. However, this transfer is relatively natural: Raphael may have written Madonna from a real character – his own mistress.
At the beginning of the XVI century, Rome waged a difficult war with France for the possession of the northern lands of Italy. In general, luck was on the side of the papal troops, and the Northern Italian cities, one after another, went over to the side of the Roman pontiff. In 1512, Piacenza did the same – a town 60 kilometers south-east of Milan. For Pope Julius II, Piacenza was more than just a new territory: here was the monastery of St. Sixt, patron of the Rovere clan, to whom the pontiff belonged. To celebrate, Julius II decided to thank the monks (who actively campaigned for joining Rome) and ordered from Rafael Santi (by that time already recognized master) an altar image, on which the Virgin Mary is to Saint Sixto.
Rafael liked the order: he allowed to saturate the picture with symbols important to the artist. The painter was a Gnostic – an adherent of the late-antique religious movement, relying on the Old Testament, Eastern mythology and a number of early Christian teachings. The Gnostics of all the magic numbers especially honored the six (on the sixth day, according to their teachings, God created Jesus), and Sixt is translated as “the sixth”. Rafael decided to beat this coincidence. Therefore, the compositional picture, according to Italian art historian Matteo Fitstsi, encodes a six: it consists of six figures, which together form a hexagon.
Work on the “Madonna” was completed in 1513, until 1754 the picture was in the monastery of St. Sixt, until it was bought by the Saxon Elector August III for 20,000 tsehinov (almost 70 kilograms of gold). Prior to the beginning of the Second World War, the Sistine Madonna was in the Dresden Gallery. But in 1943, the Nazis hid the picture in the adit, where, after a long search, it was discovered by Soviet soldiers. So the creation of Raphael fell into the USSR. In 1955, the Sistine Madonna, together with many other paintings exported from Germany, was returned to the authorities of the GDR and is now in the Dresden Gallery.