About movement World of art of the beginning of XX century 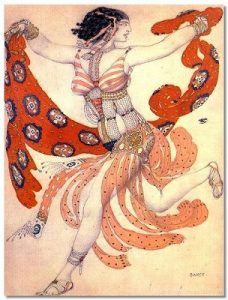 The artistic association “World of Art”, formed at the beginning of the 20th century in Russia and partly emigrating after the Revolution, united such artists as artists L.S. Bakst, A.N. Benois, Somov K.A., Dobuzhinsky M.V., Roerich N.K., V.M. I am. Vasnetsov, V.D. Polenov, V.A. Serov, M.V. Nesterov, I.I. Levitan, I.A. Korovin, poets A. White, D. Merezhkovsky and Z. Gippius, Yu. F. Sologub, V. Bryusov, K. D. Balmont, choreographer S. P. Dyagilev and many others. The joint publication of the World of Art magazine attached particular importance to this trend of creative personalities, and the enthusiasm for the modern style – a bright art-dominant.
Being collected under the auspices of the World of Art magazine in 1903, the followers of the famous ballet producer Dyagilev, the author of the “Russian ballet seasons in Paris”, first expressed themselves through theatrical costumes and stage decorations. So Bakst and Benois, for example, became famous.
A charming performance of The Snow Maiden by V. Vasnetsov was built there, Polenov, Golovin, Korovin, Vrubel worked there, Levitan, Serov, Yakunchikova and many, many others “grew up” and “were brought up” there.
As frequent visitors to the salons and creative circles, the “compatriots” gathered under the auspices of Savva Mamontov at his dacha in Abramtsevo, worked there, as evidenced by, for example, the project and the building of the Yaroslavl station in Moscow (the railway to Yaroslavl, Kostroma and Arkhangelsk was built by father Savva Mamontov however, the patron himself was ruined then, it came to bankruptcy, but the building of the station in the Art Nouveau style has survived to the present day). In the 1870-90s, I. E. Repin, V. M. and A. M. Vasnetsov, V. A. Serov, I. S. Ostroukhov, E. D. Polenova, K. A joined the Mamontovs’ circle of friends. Korovin, M. V. Nesterov, M. A. Vrubel, A. A. Kiselev and other artists. Since the late 1870s. members of the circle lived and worked in Abramtsevo for a long time. The procession in the Kursk province (1880–1883) and “We did not wait” (1884–1888) Repin, “Alyonushka” (1881) and “The Bogatyri” (1881–1898) Vasnetsov, “Girl with peaches “(1887) Serova,” Vision to the youth Bartholomew “(1889–1890) Nesterov and other masterpieces of Russian painting.
Along with this prominent philanthropist of writers and poets, the bibliophile was sponsored by merchant Ivan Dmitrevich Sytin. Along with the artistic and literary group “World of Art”, the movement “The Jack of Diamonds” appeared, which has been the successor of the ideas of the “World of Art” in Moscow since 1910. For artists “Jack of Diamonds” was characterized by the denial of realism in art and adherence to post-impressionism, cubism and Fauvism.
Carrying along such artists as M.A. Vrubel, F.O. Shekhtel, the “world students” created a special world, which was sold as the Russian region of the French style “Art Nouveau” or “Art Deco” called “Modern”. In our Antikzon gallery, many objects have something in common with Oriental motifs, absorbed in Art Nouveau art from China, Korea and Japan. And a part, say a silver spoon with a monogram of I. Khlebnikov, applies to it directly. These oriental motifs, say, cedar and coniferous ornaments, or lilies and curved windows, marsh plants and the “underwater kingdom” in architecture and ornaments of interior objects (the house with chimeras of Vladislav Gorodetsky in Kiev – see the photo) became the “trademark” of the Russian Moderna.
Our Gallery of Contemporary Art continues a series of articles on the history of Russian and Soviet art.
We invite everyone to visit our Master Classes and Lectorium on the history of painting, graphics, sculpture, history of fine art, which will be held in Moscow in the very near future. We recommend signing up in advance and identifying those topics of lectures that would be of interest to you. Come, it will be interesting.