10 facts about the picture of Aivazovsky “The Ninth Wave” 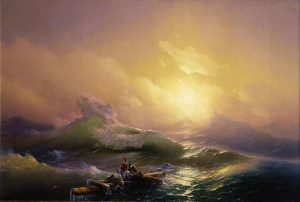 We continue the project “The History of One Picture.” In it we tell about the most famous canvases from Petersburg museums. Today – “The Ninth Wave” by Ivan Aivazovsky.
Fact one. The author.
The great Russian artist Ivan Aivazovsky has Armenian roots. His ancestors bore the name Ayvazyan. He himself was recorded in the register as Hovhannes Ayvazyan. And his father signed the name “Gaivazovsky.” The same name when entering the art school and used the future painter. A few years later, he decided to drop the first letter – and became Aivazovsky.
Fact two. Official.
In September 1844, the Petersburg Academy of Arts awarded Ivan Aivazovsky the title of academician. And a few days later the artist was counted among the General Naval Staff. He received the title of the first painter and the right to wear a marine uniform. His duties included writing views of Russian ports and coastal cities. True, the artist was not assigned a cash allowance – he had to work “on a voluntary basis”.
Fact three. People’s.
The painting “The Ninth Wave” was painted in 1850. Aivazovsky took the name from the popular belief that during a storm one of the waves stands out for its power and size. By the way, the ancient Greeks considered the third wave to be the most disastrous wave, the Romans – the tenth. In the views of other seafarers, the ninth wave was the most crushing.
Fact Four. Spontaneous
For the picture, Aivazovsky chose a terrible elemental moment. We see huge waves, the sky in the flashes and a handful of people desperately struggling with the elements. Will they survive the most powerful wave? The artist does not give a clear answer. But having appeared, perhaps for a single moment, the lumen, a little to the right from the center of the picture, gives hope for salvation.
Fact five. Feodosia
Naturally, Aivazovsky worked on a painting in his studio in Feodosia. But it captures the moment, remembered by the artist of the storm, which he saw in the Bay of Biscay in 1844. The ship with Aivazovsky pleased the storm and only by a miracle did he manage to escape. And in some newspapers have already managed to report the death of the Russian painter. However, a badly damaged ship returned to the port a few days later.
Fact six. Master’s
The artist worked in the workshop, which was located in the northern part of his home in Feodosia, where the ray of sunlight penetrated only in the evening, after three hours. Therefore, he was limited in time to work on the picture. Some experts say that it took only three hours for the artist to write this masterpiece, without taking into account the preliminary work on the sketches. To believe in this is difficult, given the scale of the canvas.
The seventh fact. Successful
The picture came to the public liking. Wherever Aivazovsky exhibited her, a queue lined up. Russian critics wrote rave reviews and compared the canvas with Bryullov’s “Last Day of Pompeii”. In the autumn of 1850, the painting was on display at the Moscow School of Painting, Sculpture and Architecture. Ivan Shishkin, who was then only 19 years old, is told that he spent several hours before this work.
The fact of the eighth. Tretyakovsky
Famous collector Pavel Tretyakov became interested in the success of Aivazovsky. He especially liked the “Ninth Wave”, and he was going to buy it from an artist. In one of the letters, Tretyakov wrote to Aivazovsky: “… give me only your magic water with such a one that would completely convey your unmatched talent! I really want to have your picture in my collection as soon as possible! ”
Fact nine. Imperial
But Tretyakov was not lucky. The picture was bought by Emperor Nicholas I for the Hermitage. In 1897, it was transferred to the Russian Museum created at that time. There she is now.
Fact ten. Japanese
However, sometimes the picture goes on tour. From the Russian Museum, she traveled 8 times. The farthest trip is to Japan. Strangely enough, but the inhabitants of the land of the rising sun generally breathe unevenly to the work of Aivazovsky. In 2003, in the year of the 30th anniversary of the Fuji Museum, his administration conducted a survey among visitors: which of the works over the past thirty years is most memorable? And the Japanese audience answered in unison: “The ninth wave” of Aivazovsky ”.