Fayum portraits: posthumous images of contemporaries of Christ that have come down to our days 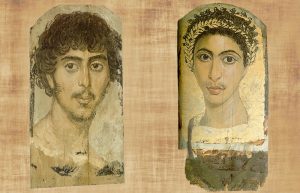 Fayum portraits – ancient Roman provincial portraits, named after the Egyptian oasis Fayum, where they were found. The Greeks, who settled in Egypt in the period of 1 century BC. – 3rd century AD, they used such portraits in their funerary cult, placing them on shrouds in approximately the same way as today on the monuments they make photos. In our review, 20 of the 800 portraits known today, which depict contemporaries of Christ.
The first description of the funeral portraits dates back to 1615, when the Italian explorer Pietro della Valle brought two portraits from Saccara-Memphis to Europe from the oasis. Today they are stored in the collection of the State Art Collection of Dresden.
And although the interest in the culture of Egypt was very high, the next time the funeral portraits were talked about only in the 19th century. In 1827, two more portraits appeared, however, information about where they were brought from, has not reached today. It is possible that these were Thebes or again Saqqara.
In 1820, commissioned by the German government, Baron Minutoli acquired several funeral portraits, but they died along with other ancient artifacts during shipwreck. Several portraits were brought to London and Florence. The people depicted in the portraits were considered to be members of the family of the archon Pollios Zother of Thebes, which is repeatedly mentioned in written sources, but this opinion turned out to be erroneous.
When in 1885, Hunt and Grenfell began excavations at Fayoum, it did not even occur to them that this campaign would make them world-famous. During their expedition, archaeologists found mummies wrapped in pieces of used papyrus in the Fayum’s Greco-Roman burials.
After studying these documents, they found completely unique fragments of the works of classical authors. Thus, the previously unknown works of Aristotle, Sophocles, Menander, and many others returned to the world. During the excavations, so-called “portraits from Fayoum” were also discovered. Found funeral portraits and later.
Historians claim that Roman colonists relatively quickly absorbed local beliefs and began to bury their dead in Egyptian style. But, unlike the natives, instead of traditional masks, they made portraits of the dead.
Thanks to the dry Egyptian climate, the strikingly realistic images of men and women are very well preserved. In some portraits, the paint looks still fresh. The main feature of the Fayum portraits is that gold leaf was used to create them.
In some of the portraits, the entire background was gilded, in others, only headbands or wreaths, sometimes individual details of clothing. Portraits were performed on various types of wood, both local (yew, fig, linden, plane tree), and imported (pine, cedar, cypress, cedar, oak).
To date, 800 Fayum portraits are known. By the way, in the museum to them. Pushkin in Moscow, there is one example of Fayum painting.
Interesting archaeological finds happen today. Thus, ancient Greek mosaics were recently discovered in the Turkish city of Zeugma.