Explore Bosch: the hidden meanings of the “Garden of Earthly Delights” 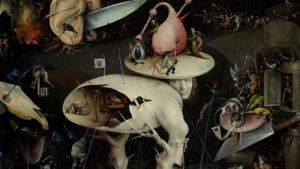 Despite the great work of researchers, the fantasy world of this amazing artist has not yet been solved.
“Melody, written on the boy’s buttocks”, apparently, not a very good name for a musical work, but it was born thanks to one of the most famous paintings in the history of art.
When student Amelia Hemric saw a fragment of the “Garden of Earthly Delights”, she decided to play a melody, the notes of which are written on the buttocks of one of the many martyrs depicted on the right panel of the triptych.
The body of the martyr, crushed by a huge lute and harp, is surrounded by people and monsters. Someone is holding a frog on its peak, engulfed in flames.
Welcome to the world of fantasy Bosch, the most mysterious Dutch artist of the XV-XVI centuries.
His most famous painting – “Garden of Earthly Delights”, written in the period 1490-1510. – demonstrates the views of the artist on morality and sin. And the devil, as you know, is in the details.
According to art critics, the Garden of Earthly Delights is perhaps the most recognizable image of hell in all Western art.
And if Sartre said that hell is other people, Bosch’s hell is people along with owls, monsters and strawberries, as well as buttocks, on which the score has been tattooed.
“I assumed that the note is located on the second line, as was customary in that era, and rewrote the melody with a modern musical notation,” explains Amelia Gemrick on her blog, which instantly went viral.
The 500-year-old musical etude from hell, played on the lute, harp and lyre to the accompaniment of the Gregorian choir, turned out to be a truly magical melody.
This is what Bosch’s genius is about: creating a huge panorama of heaven and hell, he adds little unexpected details that tell much more than it might seem at first glance.
Players
Torture, injuries and … backgammon. On one fragment of the right panel of the triptych there is a scene in which devilish creatures torture sinners, stick knives in their backs and string hearts on the spear.
And next to them are the dice and the board.
Grotesque creatures do not just hurt, they play with their victims, they scoff at them.
As the researchers note, in particular in the documentary film “Bosch: The Devil’s Touch”, Bosch’s hell is markedly different from its images by other medieval artists, where sinners are boiled in pots, fried in pans or eaten alive.
Rembrandt – the first who came up with self?
In the Garden of Earthly Delights, sinners suffer not only from physical torture, but also from psychological. Their souls are tormented by fear, anxiety, chaos and despair.
Birds
Next to the suffering – humor. In the central panel of the triptych, naked people ride huge birds – thrushes, ducks and woodpeckers.
And this is not only a visual joke, but also a game with verbal meanings, because the Dutch verb “vogelen” (from vogel – “bird”) can also mean sexual intercourse.
Kultobzor: Van Gogh’s legacy and the luxurious film of Zemeckis
Cheese as a muse for artists
The canvas hides many other surprises. For example, if you conventionally draw two lines from the upper corners through the middle of a triptych, you can see an Easter egg at the point of their intersection.
According to art historian Kelly Grove, the artist thus hints that there is still a way out of the terrible world he created. After all, the egg is a symbol of the eternal rebirth of life, and also a symbol of hope.
Sink
For the first time, “The Garden of Earthly Delights” is mentioned in 1517. The Italian priest, Antonio de Beatis, who accompanied the Cardinal of Aragon during his visit to Brussels, wrote in his travel notes that he had seen a “triptych with strange things”.
In his “Dictionary of sexual utterances and images of the era of Shakespeare and Stuarts,” Gordon Williams notes that mollusks have long been considered a symbol of the female genital organs.
The pearls inside the shell symbolize the family. In the works of the Roman writer Pliny, a species of mussels called the “sink of Venus” is mentioned.
Strawberry
In the first descriptions of the triptych it is often called the “strawberry picture”, although the Garden of Earthly Delights abounds in other types of fruit. A group of people picking apples from a tree, in a scene with an obvious reference to the Bible, a man with an ominous grin treats a woman with strawberries.
In another part of the picture, the couples feed each other berries – the scene is quite in the style of courtly novels. However, this is more than just flirting.
• The most passionate kisses in art history
According to one critic, Bosch “distorts and disfigures” the theme of courtly love, as “love fruit” – the traditional symbol of love, both earthly and spiritual, – turns into a hell of a burden in his picture. ”
Pig nun
At first glance, a pig in a nun’s outfit seems to be the most important figure of this fragment, but the amputated leg beside carries a much deeper meaning.