The Creation of Adam by Michelangelo Buonarroti, 1511 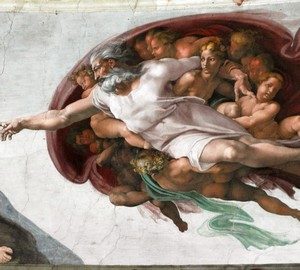 The greatest miracle appears before the viewer in all its glory. The mystery that does not cease to excite the imagination of man is interpreted by the great master very logically and coherently.
Flies in the endless space of the Creator, surrounded by helper angels. The last great Matter is left to complete the Creation of the world – the creation of man, the only living being similar in image and inner filling with the Creator himself.
Accurate and sure gesture of God the Father. Divine energy has already begun to fill the body of the ideally composed Adam, the first of the people.
With enthusiasm and reverence, angels are watching the Great Sacrament of creation. There are many among the helpers of God who are filled with fear and bewilderment. What will this new, unprecedented creature be like? What will it bring to this newly created world? Will the Great Trust of God justify?
The figure of Adam deserves special attention. The author creates this image with love and special care. Before the viewer is the very first person on earth, and therefore he is perfect. It does not find a single flaw. As if waking from a long sleep, not fully understanding the meaning of everything that is happening, Adam is filled with the energy of life, carefully looking into the eyes of the Creator of the world.
Interestingly, the master creates the image of Eve, still uncreated, but existing in the Great Plan. Her image of the viewer sees among the angels, under the left hand of the Lord. With undisguised interest, even curiosity, the first woman is watching the Divine act of creation.
Despite the fact that the image of God the Father was created majestic and his power is not in any way questioned, the viewer has the seditious idea that man and God in this work are more likely equal partners, that there is undoubted innovation in Renaissance art.
The author avoids saturated and spectrally pure colors. The color of the frescoes is soft and muted. The only thing that gives the composition energy is the cloak of God the Father, painted in a purple-red color, a symbol of comprehensive power over the world.
The light background is designed to highlight the figures of the main actors. He draws the viewer’s eye to the very fact of Creation. Makes him feel the awareness of the Majesty of God, His boundless Will and the power of His Creation.
Work today is one of the most recognizable in the world of painting.
The very fact of the transmission of Divine energy made this work extremely popular among contemporary artists and computer design masters. A well-known company for a long time used a computer graphic image of the non-touching hands of the Father and Adam as an advertisement. The plot is used not only in advertising, but also in popular culture, thanks to the universality of the idea and recognition of this part of the painting of the ceiling of the Sistine Chapel.