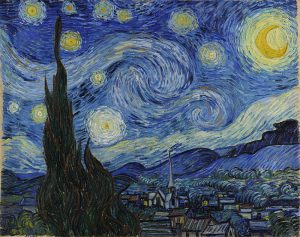 There is no artist in the world who would not be attracted to the starry sky. The author has repeatedly appealed to this romantic and mysterious object.
The master was closely within the real world. He considered that it was his imagination, the game of imagination, which was necessary for a fuller image. It is known that by the time the picture was created, the author was undergoing another course of treatment, he was allowed to work only if his condition improved. The artist was deprived of the opportunity to create in kind. He created many works during this period (including “Starry Night”) from memory.
Powerful, expressive strokes, thick colors, difficult composition – everything in this picture is designed for perception from a long distance.
Surprisingly, the author managed to separate the sky from the Earth. It seems that the active movement in the sky does not affect what is happening on earth. Downstairs sleepy town, ready to sleep a peaceful sleep. Upstairs – powerful streams, huge stars and incessant movement.
The light in the work comes from the stars and the moon, but its orientation is indirect. Glare, illuminating the night city, look random, breakaway from the common mighty whirlwind reigning over the world.
Between heaven and earth, connecting them, grows cypress, eternal, undying. The tree is important for the author, it is the only one capable of transmitting all the heavenly energy to those living on earth. Cypresses aspire to the sky, their aspiration is so strong that it seems – even a second and the trees will part with the earth for the sake of the sky. As if the green flames look age-old branches directed upwards.
The combination of rich blue and yellow colors, the famous heraldic combination, creates a special atmosphere, fascinates and attracts attention to work.
The artist has repeatedly appealed to the night sky. In the well-known work “The Sky above the Rhone” the master is still not so cardinally and expressively approaching the image of the firmament.
The symbolic meaning of the picture, many interpret differently. Some tend to see in the picture a direct quote from the Old Testament or Revelation. Someone considers excessive expressiveness of the picture as the result of the master’s illness. All agree on one thing – the master at the end of his life only increases the internal stress of his work. The world is distorted in the perception of the artist, it ceases to be the same, it reveals new forms, lines and new emotions, stronger and more accurate. The master draws the viewer’s attention to those fantasies that make the world around us more vibrant and non-standard.
Today, this work has become one of the most recognizable works of Van Gogh. The picture is in the American Museum, but the picture comes to Europe regularly, it is exhibited in the largest museums of the Old World.