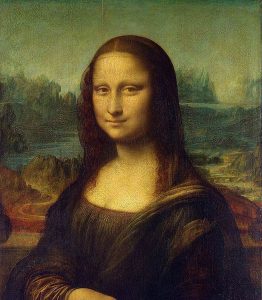 Mona Lisa smiles? Smirks? Or just twisted her mouth? Maybe even contemptuously curled? Dr. Erika Siegel (Dr Erika Siegel) and colleagues from the University of California (University of California, San Diego) believe that there can be no exact answer to such questions – everyone sees their own. Because the facial expression of the woman depicted in the picture varies depending on the emotional state of people who came to her in the Louvre. Mona Lisa is sure to smile to the cheerful, joyful, spiritual and happy visitors. Grim and evil – make a face. Indifferent – do not express anything at all.
Erika Siegel told the British newspaper Daily Mail that she drew conclusions from experiments. 43 volunteers took part in them – people are not quite ordinary, but with a pronounced dominance of one eye over the other. A person who has a dominant or leading eye, as it is also called, is the one that relies first and foremost in receiving visual information.
Volunteers showed images of two people at the same time. Before the dominant eye flashed nothing expressing physiognomy. And the other eye saw faces showing different emotions – happiness, fun, anger, fear.
After the demonstration, volunteers were asked to evaluate what they saw. And it turned out: an expressionless face that flashed before the dominant eye seemed smiling, if the other eye saw a happy or joyful face. And vice versa: the evil and sad faces “erased” a smile from a neutral person.
Scientists believe that a similar phenomenon manifests itself when meeting with Mona Lisa. She begins to smile at a person who has come in a good mood, in a cheerful mood, in anticipation of a miracle. And not after a quarrel with his wife, as noted by Eric Siegel.
Volunteers found a real Mona Lisa smile among counterfeit ones and rated her as funny ..
Volunteers found a real Mona Lisa smile among counterfeit ones and rated her as funny ..
No doubts
So how does Lisa smile at all? Is it pitiful and bitter? Or happy and fun?
Those who do not doubt that Mona Lisa still smiles, argue about something else. De, and how she smiles? Sad or fun? Argue for several centuries. Because they fall under the power of a mysterious phenomenon: those who had to look at the famous portrait of the work of Leonardo da Vinci – not all, but many – had a dual impression. At first it seemed that the woman’s smile was mocking and sly. And then – literally in a few minutes – she became sad. In the end, some even called the smile plaintive and bitter. Like Odessa Murka before she was slaughtered.
The situation was clarified by experiments that were recently conducted in Germany in 2017 (Institute for Frontier Areas of Psychology and Mental Health, Freiburg, Germany). On their basis, German psychologists made two important conclusions. The first – on the face of a woman really plays a smile, not a smirk or a grimace. The second conclusion: this smile is cheerful. Or – as you want: joyful, mocking, friendly. But not sad.
Experimenters “cut out” from the picture of Leonardo da Vinci plot with lips. And they slightly corrected them – where they lifted their tips, where they dropped them. The result was a set of 9 smiles. One of them was real – the real Mona Lisa from the picture. Four were “saddened” and four “amused.” Smiles mixed up and began to show volunteers, so they appreciated them. There were 12 volunteers, each one got acquainted with a set of 9 smiles 30 times.
Result: 97 percent of participants in the experiment recorded a smile from Mona Lisa’s portrait funny. What scientists have made their “emotional” conclusions. Read more – in the journal Nature in the article Mona Lisa is always happy – and only sometimes 🙁
“Mona Lisa, portrayed in the portrait, is pleased with everything,” says Jürgen Kornmeier, who led the research. – Not sad, obviously, and a woman who posed for the master.
In fact, was she to be in sorrow? According to the most plausible hypothesis, Leonardo da Vinci, who painted in the period from 1503 to 1517, posed for Lisa Gerardini del Giocondo – the wife of a wealthy merchant, a silk merchant named Francesco del Giocondo. Allegedly, he ordered her portrait.