“The Last Supper”: the story of the famous fresco by Leonardo da Vinci 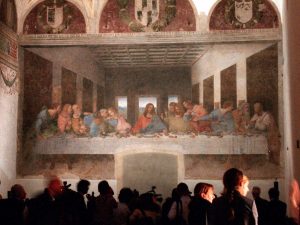 The Last Supper by Leonardo da Vinci is one of the most famous images of the last meal of Jesus Christ with his disciples. He began work on it in 1495 or 1496, and graduated in 1498. This masterpiece of the Renaissance has been praised, studied and replicated for over 500 years, and the fresco itself is still on the wall of the monastery of Santa Maria delle Grazie in Milan. The publication Business Insider talked about it with the historian and author of the book “Leonardo da Vinci and The Last Supper” Ross King.
At one time, the fresco was very popular.
A copy of the frescoes by Italian artist Dzhampetrino. Photo: Wikimedia Commons
Despite the fact that today Da Vinci is known as the author of various inventions, manuscripts, drawings and sketches, it was the Last Supper that ensured him fame during his lifetime. According to King, this image immediately became very popular in Europe. “It was the most copied picture of the next century. In the course was not only paint, but also marble, wax and ceramics. Everyone wanted to have their own version. Leonardo has finally created the work he so dreamed about and which brought him fame, ”he noted.
Dramatic fresco added features of her composition and details
The composition is based on the rule of thirds.
The fresco depicts the reaction of the apostles to the words of Jesus: “Verily I say unto you, that one of you will betray me.” King noted that Da Vinci, like no one else, paid tribute to this episode. “He grouped 13 figures in the image in such a way that everyone was distinguished by his gestures, but did not distract attention from the overall effect,” added the historian. Each of the figures turned out to be unique and memorable, and all thanks to the details.
Fresco miraculously managed to survive
The Last Supper survived bombing, dampness and several centuries of environmental damage. When asked why this image of the 15th century is so revered today, King replies that its preservation is almost a miracle. “A hundred years ago she was considered lost forever. And after the recent restoration, we can appreciate its beauty. Even in spite of some damage, this is a beautiful picture, ”he added.
Several times the “Last Supper” was on the verge of destruction
In the history of the fresco there were many dangers. When King Louis XII invaded Milan in 1499, he intended to cut the image off the cathedral wall and take it with him. By the middle of the XVI century, the fresco was considered completely destroyed due to moisture and exfoliation of paint.
In 1796, the French again attacked her. This time in the face of the French Revolution. Then the troops used the refectory of the monastery as their base and expressed their anti-church thoughts opposite the image.
However, this is not all bad in his story. The city authorities used this room to hold prisoners. In the XIX century, some people with good intentions tried to restore the fresco, but their attempt nearly ended with the fact that the picture broke into two parts. However, the most dramatic incident occurred on August 15, 1943, when Allied forces bombed the building. And although most of the church turned into a pile of rubble, the Last Supper remained unharmed.
It all started differently
Da Vinci began work on the mural at a very inappropriate time. Just a year before the start of the project, Louis XII began the First Italian War. “It was a terrible tragedy for Italy, the beginning of decades of occupation and struggle. For an artist, these events meant a loss of the order he had been working on for about 10 years, a huge bronze rider on a horse, ”King says.
In those days, bronze was collected and melted into steel for weapons. Da Vinci not only lost money because of the war, but also the possible fame and reputation in the creative circles, which he so much wanted to achieve. As compensation, he received an order for the Last Supper, although this seemed to him not a very good substitute.
Da Vinci thought he would never create a masterpiece
“Now Leonardo is considered a genius who can do anything. But he had his own disappointments and failures. In 1499 he was 42 years old. Then many contemporaries believed that he wasted his potential. He was unable to complete several orders, as a result of which people began to consider the artist unreliable, ”the historian comments. One of the poets scoffed at da Vinci due to the fact that in 10 years he has hardly finished one painting. Because he really wanted to create something that would bring him fame and reputation among future generations. All this he managed to get after the Last Supper.
Da Vinci created a fresco on top of his earlier works
Thus, one of the apostles recalls one of his early works. Da Vinci has always been in search of interesting faces that could be captured. According to King, one of them can be found in the image of James Zebedee.