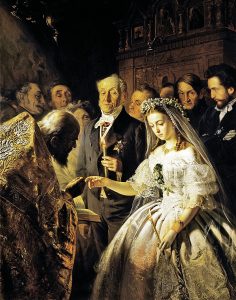 “She exchanged me for a rich manufacturer!” – sobbing, explaining the reason for parting with her beloved Sophia Rybnikova, friend of the young artist Vasily Pukirev, merchant Sergey Varentsov. And while the abandoned bridegroom tried to understand that the 24-year-old favorite found this “old man” (although his rival named Karzinkin was only 37 years old), the artist took and used this plot for the picture “Unequal Marriage”. True, the difference in the age of the newlyweds in the picture seems to be much larger, and the manufacturer was drawn generals shoulder straps.
There was a place on the canvas and the retired bridegroom – he is looking out from behind the bride’s shoulder with a mute reproach. He, by the way, at the time was 30 years old.
Seeing the picture at the presentation, it was the Academic Exhibition of 1863, – Varentsov threw a scandal to a friend. Pukirev had to change the image of Varentsov in the picture. They say that it was faster, the artist took his face as a basis. As a result, a reconciliation between friends still took place. And the critics liked the picture so much that Pukirev was given the title of professor for it.
Meanwhile, the bride herself Sofia Rybnikova was very happy in the “unequal marriage”. She gave birth to three children, built a manor outside the city, lived for 35 years in love and harmony.
Rembrandt: get out of the twilight
The business card of Rembrandt – the painting “Night Watch”. Or rather – “Speech by rifle company of Captain Frans Banning Kok and Lieutenant Willem van Ruytenburg”.
After writing the canvas was placed in the building of the Shooting society. Then it hung in various halls for almost 200 years and was discovered by art historians only in the 19th century, when a new interest in Rembrandt was awakening. Since it seemed that the figures appear on a dark background, it was called “Night Watch”. Under this name she entered the treasury of world art.
And only during the restoration carried out in 1947, it was found that in the hall of society the picture had time to be covered with a layer of soot. After the cleaning, it finally became clear that the scene presented by Rembrandt actually occurs in the daytime. That is, the daily watch! The position of the shadow from the left hand of Captain Kok shows that the duration of the action is about 14 hours.
Salvador Dahl – author of the Chupa Chups logo
In 1958, a loss-making company was inherited from his grandfather Enrique Bernat. Grandson decided to raise the company from his knees and focused on the release of candy. But how to make them known? Start selling them on a plastic stick. Before him, only homemade cockerels were sold on a wooden “stand”, so this trendy format quickly made chupa chups popular. It remained to make it recognizable.
“To ask Salvador Dali to create a logo was“ well, a very big impudence, ”the handy businessman admitted later.
But, surprisingly, the eccentric master agreed. They say for half a million dollars.
Today, this image flaunts on candy in a slightly modified form – but it is recognizable.
By the way, ten years later, with the blessing of the Pope, Salvador Dali released a unique version of the Bible with his illustrations. If you are a genius, then a genius in everything.