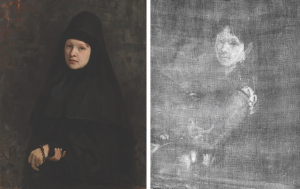 Works of art often become particularly popular if they are legends about them or if they unexpectedly turn out to be not what they seem at first glance. “Kultura.RF” reveals the secrets of famous – and not very – Russian paintings.
“The Nun” by Ilya Repin
A young girl in strict monastic clothes looks at the viewer thoughtfully from a portrait. The image is classic and familiar – he probably would not have aroused interest among art historians if it were not for the memoirs of Lyudmila Alekseevna Shevtsova-Spore – the niece of Repin’s wife. They found a curious story.
Sophia Repina, nee Shevtsova, posed for the “Nun” Ilya Repina. The girl was a sister-in-law to the artist – and at one time Repin himself was seriously passionate about her, but married her younger sister Vera. Sophia also became the wife of Repin’s brother Vasily, an orchestra student of the Mariinsky Theater.
This did not prevent the artist from repeatedly writing portraits of Sophia. For one of them, the girl posed in the ceremonial ball dress: light elegant dress, lace sleeves, high hair. While working on the picture Repin seriously quarreled with the model. As you know, the artist can offend anyone, but few can take revenge as ingeniously as Repin did. Offended artist “dressed” Sophia in a portrait in monastic clothes.
History, similar to the anecdote, confirmed the roentgenogram. The researchers were lucky: Repin did not peel off the original paint layer, which allowed to consider in detail the true outfit of the heroine.
Park Alley by Isaac Brodsky
Not less interesting riddle left for researchers Repin’s disciple – Isaac Brodsky. His picture “Park Alley” is kept in the Tretyakov Gallery, which at first glance is unremarkable: Brodsky had a lot of work on the “park” theme. However, the farther into the park – the more colorful layers.
One of the researchers noted that the composition of the painting aroused interest amonganother work by the artist – “Park Avenue in Rome” (Brodsky was stingy with the original names). For a long time, this canvas was considered lost, and its reproduction was published only in a rather rare edition of 1929. With the help of radiographs, the Roman alley that disappeared in a mystical way was found – right under the Soviet one. The artist did not clean off the finished image and just made a number of simple changes: he dressed the passers-by according to the fashion of the 30s of the 20th century, “took” the children of the heart, removed the marble statues and slightly modified the trees. So sunny Italian park with a couple of light hand movements turned into a model Soviet.
When asked why Brodsky decided to hide his Roman alley, they did not find the answer. But it can be assumed that the image of the “modest charm of the bourgeoisie” in 1930 from an ideological point of view was already inappropriate. Nevertheless, of all the post-revolutionary landscape works of Brodsky “Park Alley” is the most interesting: despite the changes, the picture has retained the charming elegance of modernity, which, alas, did not exist in Soviet realism.