The most famous and popular painting styles 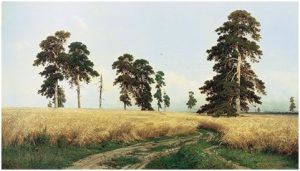 The modern Baroque is characterized by an abundance of ornaments and complexity of lines.
Cubism is an avant-garde art movement that originated in the 20th century. thanks to Pablo Picasso, she revolutionized European painting and sculpture, also inspiring similar trends in music, literature and architecture.
One of the most famous paintings of the 20th-century Cubist era is Pablo Picasso’s painting Avignon Girls, 1907.
For works of art in the style of cubism is characterized by broken, re-combined objects in an abstract form, in the image of which uses a large number of points of view.
Pablo Picasso is one of the most prominent representatives of the Cubism movement. The ten most expensive paintings ever sold include 2 works by Picasso in the style of cubism.
10 most expensive paintings ever sold
Expressionism is a modern art movement that originated in Germany in the first half of the 20th century, initially encompassing only painting and poetry.
Expressionists depict the world around 3 exclusively subjectively, radically distorting reality, for a greater emotional effect, forcing, thus, to reflect on their audience.
In expressionism, expression prevails over the image. This period is characterized by motives of pain, anguish, cry, suffering.
The material reality of expressionist artists is absolutely not interested, their paintings are imbued with emotional experiences and deep meaning.
Impressionism
His name is obliged to the picture of Claude Monet “Impression, Sunrise” (“Impression” translated into English – impression).
Impressionism – the direction of painting, 4 which is mainly aimed at working not in the studio, but in the open air (plein air).
Painting in the style of impressionism is designed to convey the light sensation of the artist.
The main characteristics of impressionism include: relatively small, thin, barely visible strokes; open composition; an accurately transmitted change in lighting (often emphasizing the effect of the passage of time); common, simple goal; the presence of movement, as a key element of human perception and experience; unusual vision of objects.
The most prominent representatives of impressionism are: Claude Monet, Edgar Degas, Pierre Renoir.
Modernism
It depicts both the totality of cultural tendencies and a number of united areas of art that originated in the late 19th and early 20th centuries.
In 1863, the Salon of the Outcast was opened 5 in Paris, where artists were exhibited whose paintings were not allowed into the official Salon. Actually this date marked the birth of modernism as a trend in art.
Modernism is also called “other art”, the purpose of which is to create unique, not similar to other paintings, the main feature of which is a special vision of the world by the artist.
In their work, the artists of the era of modernism rebelled against the conservative values ​​of realism. A striking characteristic of modernism is self-awareness, which often leads to experiments with form, and to a further tendency to abstraction. Particular attention is paid to the process of work and materials used.
Pablo Picasso and Henry Matisse became one of the brightest representatives of the modernism trend.
Neoclassicism
It was the main focus in Northern Europe, from the middle of the 18th to the end of the 19th century, characterized by a return to the traditions of the art of antiquity, the art of the Renaissance, and even classicism.
In a cultural, artistic and architectural sense, neoclassicism originated as the answer of Rococo, who was perceived as an elaborate and not deep style of art.
Due to deep knowledge of church laws, neoclassicists artists tried to reconstruct and introduce canons into each of their works.
Avoiding the usual reproduction of classical themes and motifs, the artist tried to put his picture in the midst of a well-known tradition and demonstrate mastery of the genre.
In this respect, neoclassicism is directly opposed to Modernism, in which self-expression and improvisation are considered virtues.
Representatives: Raphael, Nicolas Poussin, Franz Joseph Haydn …
Pop Art
As an art movement, pop art originated in the mid-1950s in Britain, and in the late 7th 1950s in America. It is believed that pop art was born as a reaction to the ideas of abstract expressionism that dominated at that time.
Of course, speaking of pop art, it is impossible not to recall Andy Warhol – one of the most prominent representatives of this trend. One of his paintings “Eight Elvis” was sold in 2009 for $ 100 million.
10 most expensive paintings ever sold
Replaced the elite art came pop art, the main theme of which are ordinary objects. Pop art focuses on the banal and vulgar elements of any culture, often doing it through irony.
Pop art has found its application in various aspects of mass art: advertising, comic books, as well as all sorts of objects related to art.