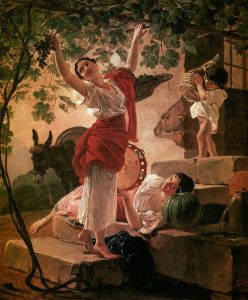 In the first century of our era there was a series of eruptions of the volcano Vesuvius, which were accompanied by an earthquake. They destroyed several flowering cities, which were located near the foot of the mountain. The city of Pompeii was gone in just two days – in August of the year 79, it was completely covered with volcanic ash. He was buried under a seven-meter thick ash. It seemed that the city disappeared from the face of the earth. However, in 1748, archaeologists were able to unearth it, opening the veil of a terrible tragedy. The painting of the Russian artist Karl Bryullov was dedicated to the last day of the ancient city.
“Last Day of Pompeii” – the most famous painting of Karl Brullov. The masterpiece was created long six years – from the plan and the first sketch to the full canvas. END_OF_DOCUMENT_TOKEN_TO_BE_REPLACED