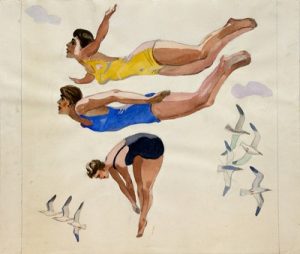 Alexander Deineka entered the history of national art primarily as the author of mosaic panels and large thematic paintings, as an enthusiastic admirer of every technique, earthly and heavenly, as well as an admirer and connoisseur of various types of physical culture and sports. His outstanding artistic gift, remarkable energy Deineka put in the service of the victorious communist ideology, which he quite sincerely considered the only correct one. But his talent was much deeper and wider than ideological schemes, even when in the 1920s Deineke had to engage in their direct propaganda. Perhaps it was at this time of open agitation that the artist’s talent was revealed most deeply and widely.
From illustration to great work END_OF_DOCUMENT_TOKEN_TO_BE_REPLACED