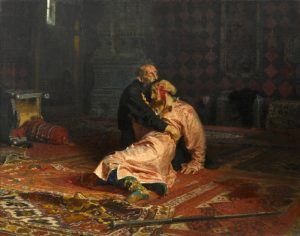 We are accustomed to associate censorship bans with forbidden books or films. But even in such a seemingly harmless genre of art as painting, artists could go against the ideological attitudes of power, because of which certain paintings were not accepted for display at public exhibitions. Several such stories happened in the Russian Empire, and they are connected not with some little-known artists, but with generally recognized masters of the brush.
One of the most famous Wanderers, Ilya Repin, by the 1880s, was an artist with great experience. Pavel Tretyakov bought his paintings, cultural figures posed for him – such as the writer Turgenev and the composer Musorgsky. In addition to portraits and a social theme (for example, “Barge Haulers on the Volga”), Repin was always interested in historical subjects. END_OF_DOCUMENT_TOKEN_TO_BE_REPLACED

Konstantin Somov is one of the representatives of Russian symbolism. The development of the artist’s style was largely influenced by his studies at the Paris-based Colorassi studio (1897–1899); it was then that he mastered the lessons of modern and French rococo. The scenes of his canvases resemble gallant balls and masquerades, which were characteristic of the bygone XVIII century. Modernity in his works is mystically connected with the previous epoch, the genre scenes of his canvases are reminiscences of the last century, his characters vaguely resemble puppet Watteau, Boucher and Fragonard, but unlike their predecessors, the artist endows those depicted more mystical ghostly than elegant elegance. V.A. Lenyashin rightly noted that the sources of Somov “beyond the borders of the past days” are much deeper, more blunt: Botticelli, Watteau, Hoffmann.
The ghostly transparent eroticism, without which Somov did not think of art, then permeates the irreversibly spicy pages of the Book of the Marquise, appears about (like the Casanova doll) in the naively challenging and mechanically outspoken image of Columbine. END_OF_DOCUMENT_TOKEN_TO_BE_REPLACED